I apologize for the delay. Translation is a tough business, especially in Ramadan. I will be posting the translations as I complete them in downloadable pdf format in this post. 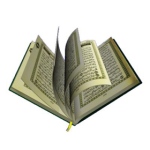 Allah’s blessings are so abundant that it is difficult to show gratitude in any meaningful way. Life itself, good health, a roof over our heads, sufficient food in our possession to last  a few days, they go on endlessly. But by far, the greatest of all of these blessings, above and beyond  any blessing you can enumerate, is the Book of Allah. It is for this reason Allah declares at the outset of Surah al-Kahf: “Praise is due to Allah, for revealing unto His servant the Book, not placing therein any crookedness.” [al-Kahf 18:1]

Part of showing gratitude for this esteemed blessing is to read this Noble Book and attempt to understand and implement it. The Qur’an was revealed in the month of Ramadan, and specifically on the Night of Power.

When we open this Book, we find that it commands us to begin its reading in a particular way.

When you recite the Qur’an, seek refuge in Allah from the accursed Shaytan. [al-Nahl 16:98]

This supplication is called the isti‘ādhah and its formula is as follows:

Now what is the wisdom and significance of the isti‘ādhah?

The greatness and virtue of studying the Qur’an is unimaginable, as we saw in the beautiful Hadith Qudsi from yesterday’s lesson. The Prophet also declared without reservation that the best people among the entire ummah are those who study and teach the Qur’an. Unfortunately, your enemy, Shaytān knows this fact all too well and will be doing his job to divert you. Hence the need for the isti‘ādhah.

Secondly, it is quite clear that in order to study and derive benefit from the Qur’an, one must rely on certain well-known means and tools, such as the Arabic language, proper works of tafsīr, knowledge of the life-history of the Holy Prophet, etc. The isti‘ādhah is an affirmation that the greatest tool and means of deriving benefit from the Noble Qur’an is supplicating the One who revealed it. This is an expression of our utter dependence on and complete need for Allah’s mercy and support. Hence we should constantly supplicate Allah to help us in all our affairs, especially if it involves His Noble Book.

There is one such supplication related to the Qur’an, a beatiful Prophetic du‘āh that shows us what our orientation should be towards the Qur’an:

nd, Your command over me is forever executed and Your decree over me is just. I ask You by every name belonging to You which You name Yourself with, or revealed in Your Book, or You taught to any of Your creation, or You have preserved in the knowledge of the unseen with You, that You make the Qur’aan the life of my heart and the light of my breast, and a departure for my sorrow and a release for my anxiety.’ [Musnad Ahmad, authenticated by al-Albani]

The Noble Qur’an should really be the springs of our hearts, the light of our chests and the erasor of our worries and concerns.

Today we live in an age of learning and study. Academic education is now considered a universal human right. While there is nothing wrong with that, the real crux of the matter is:

Read in the name of your Lord who created. [al-‘Alaq]

Real knowledge and learning is that which is connected to Allah. All other study is ignorance (jahālah). All other paths to learning lead to confusion. The Noble Qur’an is the only way out. The only way to a “Good Life” (Hayāt al-Tayyibah).

As for anyone – be it man or woman – who does righteous deeds, and is a believer withal – him shall We most certainly cause to live a good life, and most certainly shall We grant unto such as these their reward in accordance with the best that they ever did. [al-Nahl 16:97]

It appears from a study of the Qur’an, Sunnah and Islamic works that it has been a divine method to begin all matters with Allah’s name. The Prophet Nuh rode his ark with Allah’s name, “And he said: Embark therein! In the name of Allah be its course and its mooring. Lo! my Lord is Forgiving, Merciful” [Hud 11:41]. The Prophet Sulayman began his letter to the Queen of Sheba with Allah’s name [al-Naml 27:30].

Likewise, all chapters of the Qur’an begin with the bamalah, the debate over whether it is a part of the surahs or external to them aside. The only exception is Surah al-Tawbah, which does not begin with it due to 2 possible reasons: its stern content relating to themes of jihad and dealing with hypocrites, etc. or its continuity with the previous chapter al-Anfāl. This fact is proof of the meticulous preservation and transmission of the Qur’an by the Companions and successive generations, for had it been a careless matter or related to our logic, the chapter may have began with it to preserve the “coherence” and continuity of the Qur’an.

The scholars of the Shafi‘ī legal school and others recite the basmalah aloud before each surah, considering it a portion of the surah. Our Hanafi school  considers the basmalah to be a continual verse of the Qur’an that should be recited at the beginning of recitation but is not necessarily the first verse of each surah.

We were honored today with the arrival of our sage and scholar from India Shaykh Yusuf Islahi, may Allah preserve him. Shaykh Islahi has a tradition of delivering nightly lectures during Ramadan that are highly beneficial and inspiring, full of profound insight and reflections from a lifetime of scholarship and devotion. Though they are recorded every year, their reach has been limited since they are in the Urdu language.

It is our intention to present, for the first time in the English language, here at StudentofIslam.com, a summary of the notes of his daily lectures.

Since there are oral lectures and time is limited, it is not possible to provide exact references for the verses and narrations. I will endeavor to post these notes every night, and try to modify these posts as I find references and additional materials. If any reader knows a reference, or sees an error, please post them in the comments. The audio is available here, courtesy of our brother Farrukh Raza: [—–]

DAY 1: ENGROSS YOURSELF IN THE QUR’AN

·         One day, a man was fervently supplicating in the Prophet’s Masjid, “O Allah, make me among those who are your select few.” Umar ibn al-Khattab, who was the Khalifah at the time, happened to overhear him and reproached him for making a supplication not found in the Qur’an and Sunnah. The man, who happened to be a Companion, replied to Umar, “You should read the Qur’an O Umar. Haven’t you read the verse, And few indeed are those who are thankful.” I recalled this narration seeing the few people left in the masjid before me.

·         Remember that the Noble Qur’an has 4 rights upon us: reciting it, understanding it, implementing it and propagating it. Anything less than that would not be giving the Qur’an what it deserves.

·         There is a beatiful Hadith Qudsi, where the Prophet informed us that Allah the Exalted says, “Whoever from my servants is engrossed in my Book, to the point that he does not find time to supplicate to me for his needs, I will give him more than I would give a person that calls upon me with his needs.”

·         So realize that engrossing yourself with the Qur’an (which means to study and ponder over it) will fulfill your needs without your asking.

·         The fasting of Ramadan is essentially training to make us into people of the Qur’an.

·         The rights of human beings are so great, that Allah will become their spokesman on the Day of Judgement. He will call upon a person and demand, “I was hungry and you didn’t feed me, thirsty and you didn’t provide me water, naked and you didn’t clothe me.” The person will ask, “O Allah how can that be so?” Allah will reply, “Didn’t such and such person come to you and you turned him away?”

·         Abu Hurayra narrates from the Prophet that Allah informs us that every deed of a human being will be rewarded 10 to 700 times over, save fasting, for that is exclusively for me (Allah) and I will reward it as I please. [Bukhari, Muslim] According to some commentators, Allah means that the reward for fasting is Himself, meaning that those who fast will get their Lord, and can there be any honor greater than that?